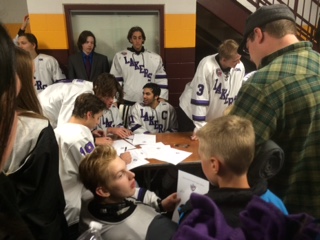 The Forest Lake Jr Hockey team known as the Lakers have taken Forest Lake by storm.  Ok, so I have gone to more hockey games this year than I have in the past 20.  And I think I should go to all of them as they have won all the games I have been in attendance.
My friends are teasing me that my son will play yet some day as they know I have been adamant about not letting him play as their kids have done or do now.  But as you can see, he has had some good fun 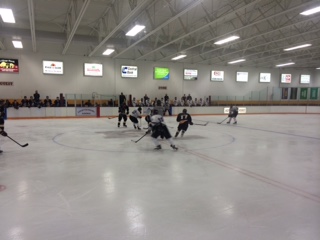 watching.  Of course sitting right next to the boards where all the action takes place.  He is like me a sports fan so thoroughly enjoys being at the games.
He also loved getting all the autographs from the players after the game.  I came from such a small town we didn’t have hockey but we knew of it being close to Roseau and Warroad MN.  And I went to college at University of North Dakota and that too was like a religion to go to the games. It has been very fun going to and following the Lakers.

I am also very happy to say that they have chosen OSI Physical Therapy as their hometown therapy practice.  We have had a great relationship working with General Manager Ralph Hayne and Coach Dennis Canfield along with the players.
Pete Larson, PT, has done all the pre-concussion testing for the team and let’s hope that they won’t be needing any post-concussion testing to compare but Pete will be ready as needed.
Let’s go Lakers!
– Tammy