Ok, the title is a bit cliche, but it still seems to pair well with the situation. Last Thursday I left OSI Physical Therapy in Stillwater at 3:00pm to drive back to St Paul. Those of us here in the Twin Cities already know that last Thursday mother nature dropped about 11″ of snow on the east metro, which we’d usually be well equipped to deal with that, but this time the roads seemed to get unusually bad. 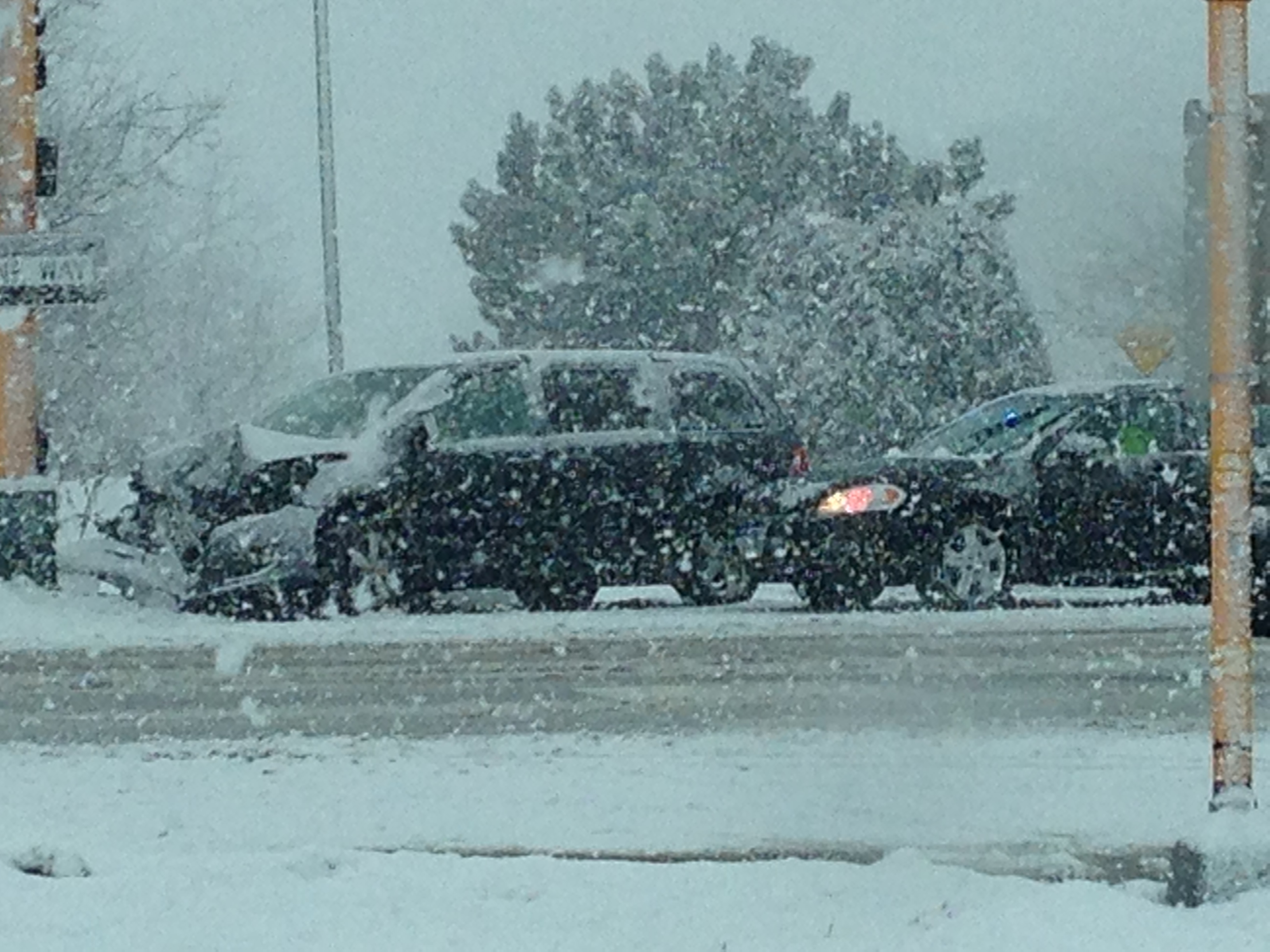 I slowly drove down highway 36 West noticing multiple accidents along the way. Sitting at a red light I noticed a driver had slid head first into a light post, thankfully he was not hurt and talking to the police officer at the scene. (pictured to the left)

As I continued down 36 West the line of cars in front of me slowly began to hit their brakes. The panicked driver in the car directly in front of me hit his brakes hard causing him to stop quicker, but it also cause his car to begin spinning in circles. I had two choices…hit my brakes just as hard and slide right into him, or try for a safe landing in the ditch. I opted for the ditch.

Now, driving a 4 wheel drive Tahoe I assumed I’d be able to maneuver through the ditch to get back on the road. Wrong. Dead wrong. Not only was the snow incredibly thick, it had lifted my truck up in the air off my tires, and the snow was hard as cement. I sighed…and called OSI Stillwater for reinforcements. Linda, the clinic manager reacted swiftly and said she’d gather some help and send them my way. I hung up the phone and thought to myself what an amazing group of people I work with.

A few minutes later Scott Wilkins and Sara Lumby pulled up with 3 shovels to help get me out. Frankly, had I been in their shoes I might have seriously considering hiding my face and driving on by upon seeing how much work would be involved with digging me out! LOL The two of them jumped right out and immediately began to help. 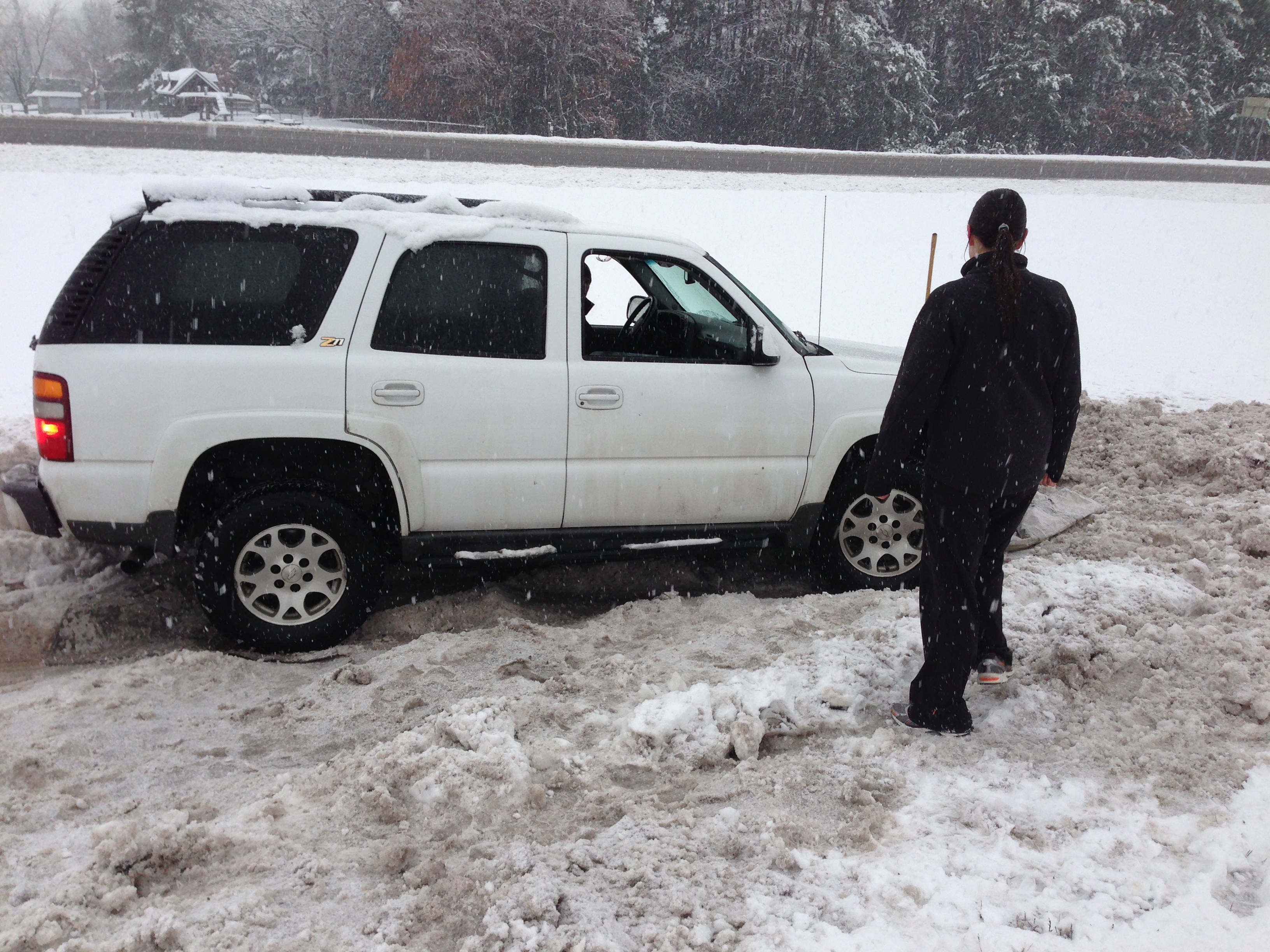 After digging all the snow out from underneath the SUV

After an hour of digging and driving back and forth it didn’t look good. We continued to slide deeper and deeper into the ditch as we tried to back out on the tracks I drove in on. We used carpets, blankets, and shovels and I don’t think any of us thought we’d be able to get this out.

Sara called AAA and they estimated a 4-5 hour wait until a tow truck could reach us. Then, the kind decision to pull over by a stranger changed the whole situation. A very nice woman offered to let us use her tow strap. We hooked it up and managed to finally pull my car over the heavy snow that it couldn’t breach on its own. 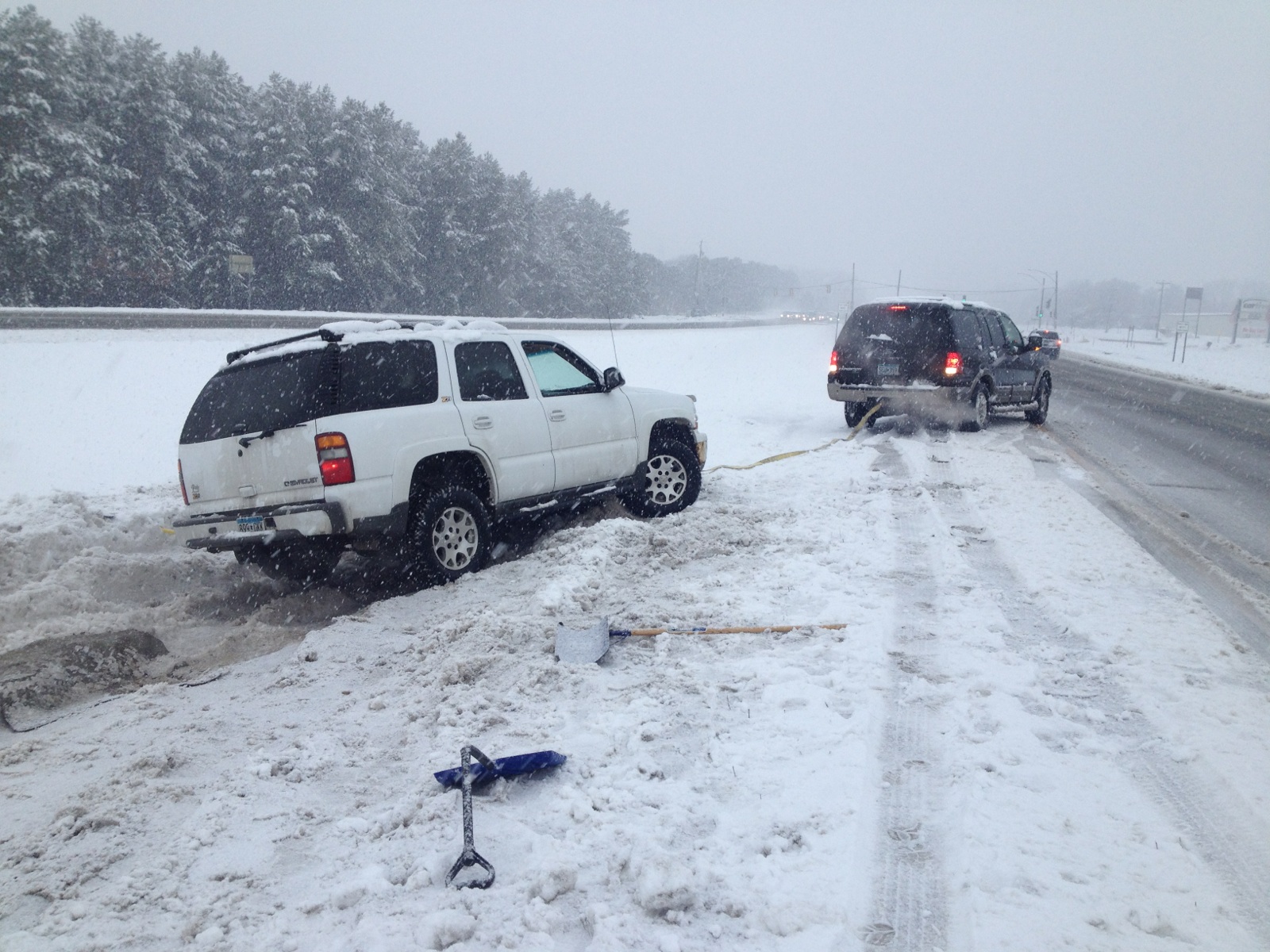 In the end it took us nearly 2 hours to get my car out and I can’t say enough how grateful I am to Scott and Sara for spending so much time and energy shoveling that heavy snow with me. They’re awesome! I love the fact that I work with such amazing people here at OSI.

You know, I can’t tell you how many times I have heard  stories like these and I always assume that it’s an easy fix. However, while sitting in my truck I realized that if I didn’t get help, I didn’t know how long I’d have to wait to get my truck out. I vowed to pull over the next time I saw someone in apparent distress, which happened the very next day. I was able to ‘pay it forward’ to a guy from Somalia stuck in the ditch on the side of highway 94. 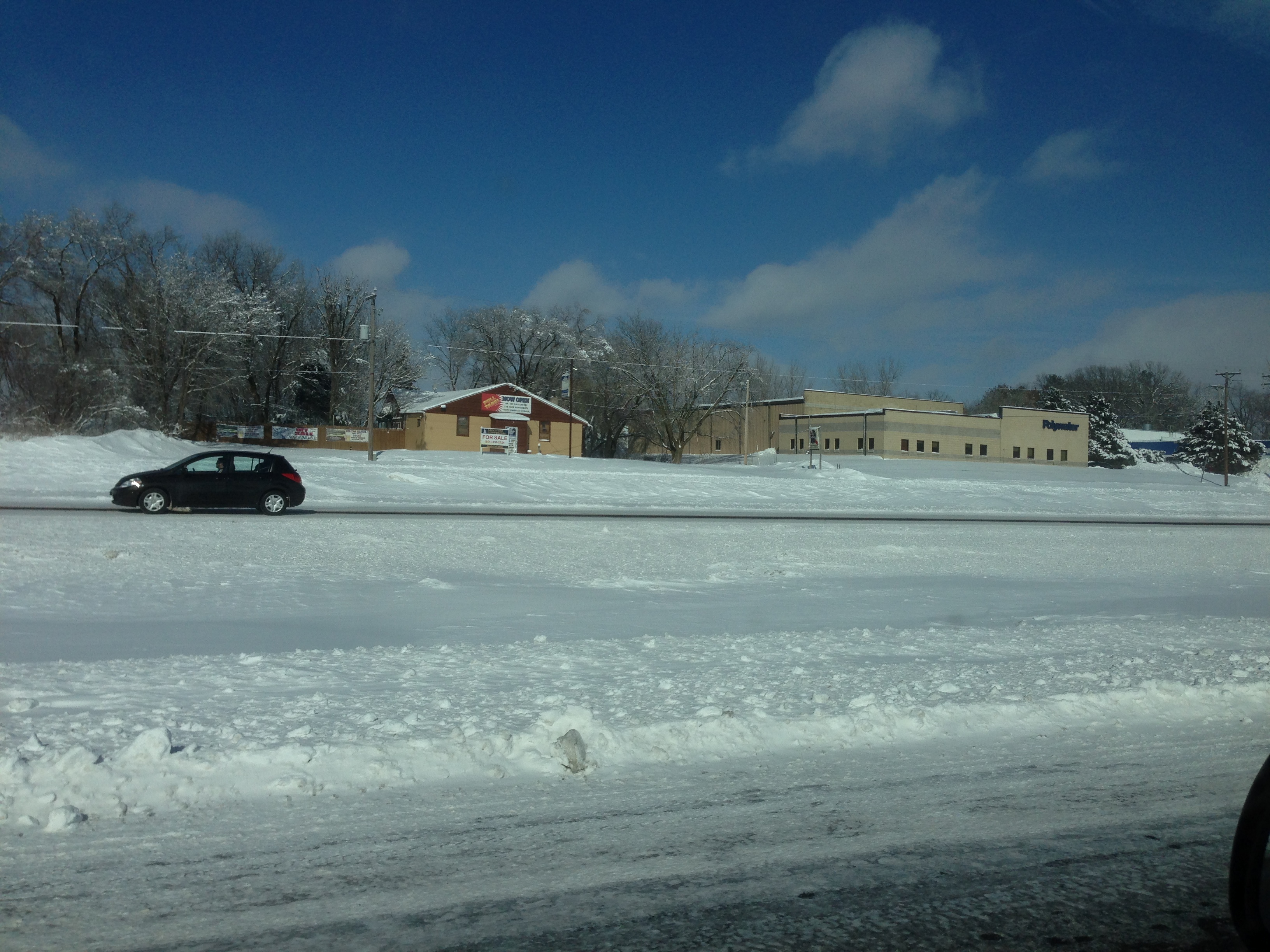 No trace of the accident

The next day, I drove by the spot I went off the road and was shocked to see the snow plows had made the whole scene simply disappear. It was as though it never happened…all just a bad dream? Nope, I’ve got the sore arms and back to remind me. Thankfully I have great PT’s here to help me with that.

Do you have a great story of colleagues that saved the day? Feel free top share your story below in the comment section.

If you enjoy reading our OSI blog posts you should sign up to receive our eNewsletter!