This was me last summer, when I was third place in my age group in the YWCA Womens Triathlon. The woman who got second place came up to the podium with her 3-4 month old baby. I was so impressed by her fitness despite recently having a baby. Up until that point believed that pregnancy might spell the end to my racing days. My competitive fire was burning and next year, I wanted to be that mom!

Low and behold that fall, coworkers were beginning to wonder if I was hung over every morning. “Nugget” caused some great morning sickness and nausea. Thank goodness for the athletic trainers in the clinic and very understanding patients who would bear with me when I had to make a quick exit. Easy spins on my cyclocross bike and running in the cool fall air helped to keep the icky feelings away, along with a steady supply of Jolly Ranchers and Starbursts. A few mornings a week I would also do prenatal yoga, although this went by the wayside once I figured out that downward dog also made my stomach go upside down!

By winter, first trimester sickness had passed but I was experiencing the surge of hormones leading to ligamentous laxity. It seemed like just walking was enough to throw my pelvis off kilter, despite my attempts to work on my core stabilization exercises. Eventually when I couldn’t get my low back and pelvis to cooperate, I went to see Steve Schneider in Stillwater. A couple visits latter, I was in better alignment and better able to do my work and workouts. During the winter I spent quite a bit of time on my cross-country skis. The husband and I stuck to flatter trails so that I was less likely to take a spill and did more classic technique than skate. Double poling actually felt great for my back and spine, I was more frustrated that my skis didn’t fit as well due to pregnancy weight gain!

By third trimester, the pool was my best friend for jogging and swimming. I still “ran” once in awhile, just to prove that I could – but it wasn’t pretty! I began to focus more on weight training; wall sits, squats, bridges, and hip work. Most exercises that I did were focused on preparing for labor and delivery as well as keeping my back and hips in good alignment.

Two days before my due date, on a lovely Saturday morning, I took the dogs for a long walk (running was pointless at this point). That evening I was sitting on the exercise ball looking at stuff on the internet when all of a sudden, POP, my water broke! The midwife advised us over the phone to come to the hospital once contractions were regular. Eighteen hours later, after a restless night and long day or on and off contractions, we packed up the car and said good bye to the dogs. With a little help to get things going, contractions were in full swing by 7pm on Sunday night. Right around midnight, I climbed into the birthing pool (basically a large kiddie pool) and within 30 minutes our little girl had arrived! No workout or race I had ever done could have prepared me for labor, but the gift of a healthy little baby girl on my chest made every moment of doubt and pain worth it! 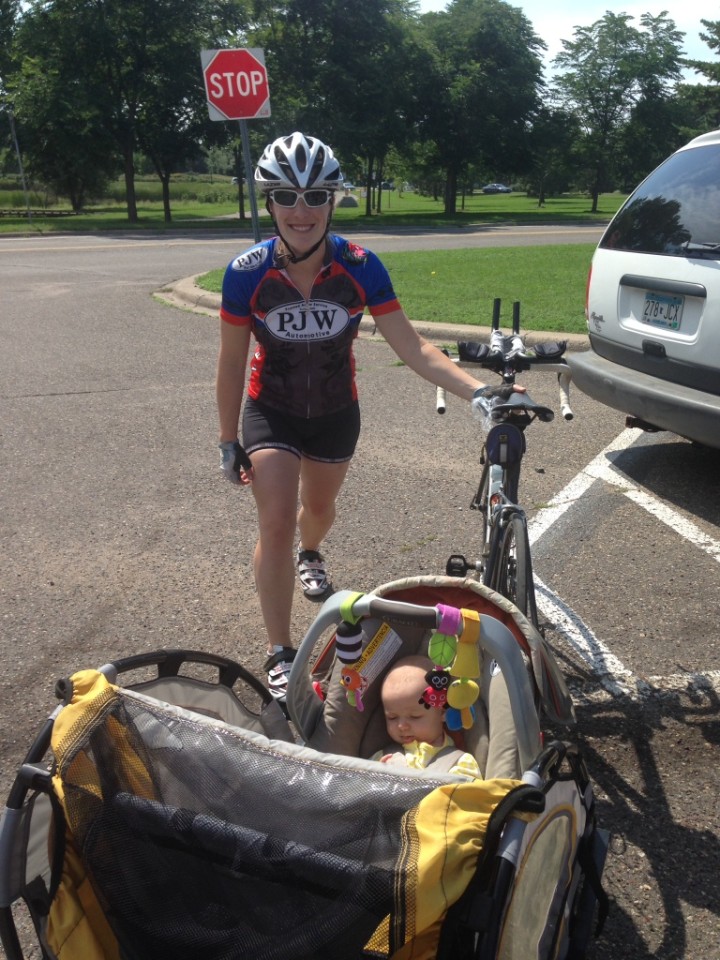 Thanks to a fairly fast and intervention free labor, we were at home with our little girl in no time. Within the first 24 hours I was out walking and starting on my core stabilization exercises. Walks and core exercise became the daily routine. I was happy, the dogs were happy, and baby loved to sleep in the stroller!

Being a medical professional, I know that it is not advised to begin aerobic exercise before 6 weeks post-partum. But I had a race to train for!!!

I started swimming once I felt that my risk of infection was lowered and I felt ok leaving baby alone. Being her one and only source of food, it was slightly terrifying to me to leave her the first time! Every week I would meet friends at the beach at Lake Nokomis for the Tuesday night open water swim and would swim while a friend watched the baby. By a couple weeks before the race, my swim was feeling strong and fast.

Once baby was about 6 weeks old and after my 6-week checkup, I finally got up the courage to hop on the bike. I was surprised that it wasn’t more uncomfortable. The worst part was riding super slow over bumps so that I wouldn’t jostle the trailer too much!

Getting back to running was by far the most daunting. I knew that the impact of running was the highest and that if anything would cause pelvic floor issues, it would be this. Initially, I would only run as long as I was able to without any discomfort or “leakage”. At first it was horribly frustrating to only be able to run 30 seconds at a time. But gradually, I built my way up until finally I ran a full 5k with my husband without stopping a few weeks before the race. I even did a couple of sessions of PT to help to speed things along!

Almost 3 months to the day of baby girl’s arrival, I was toeing the sand on the beach at the start of the race on a cool and humid morning. I was thankful for the race organizers who had the foresight to put up a special tent for nursing and pumping moms, so I was lucky enough to meet a couple other moms with young ones! Before a race I am usually a bit jittery, but this time I felt confident and relaxed…all I had to do was finish, and my husband and baby would be there! 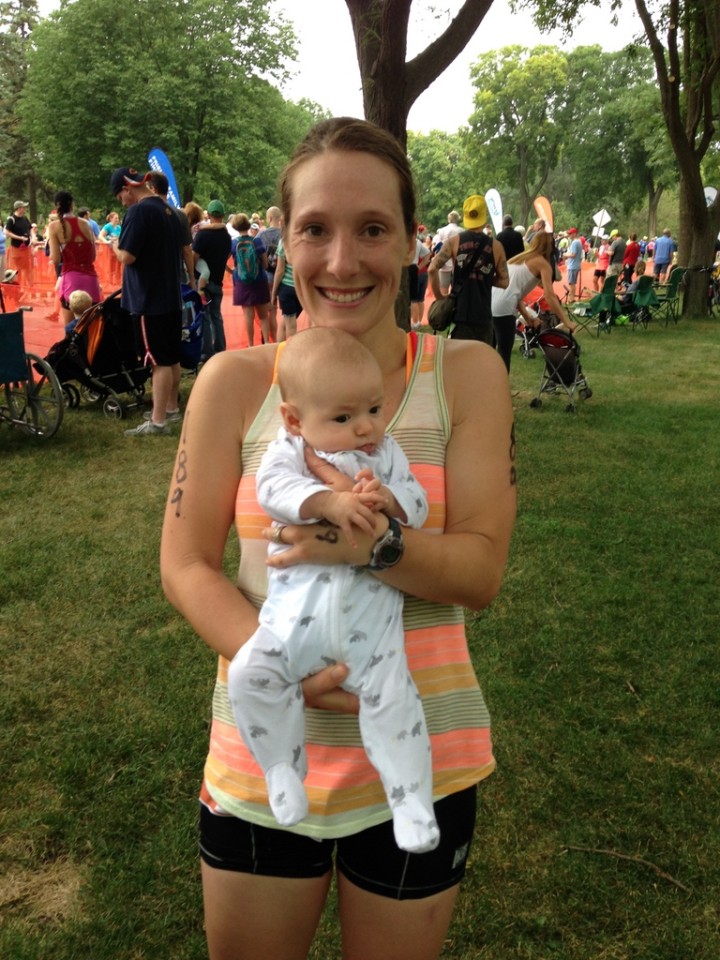 My swim went great, I was one of the first from my wave out of the water. On the bike I felt fast and smooth and easily fell into a rhythm in my aero position. I hardly saw anyone else from my age group, so I knew I was doing well. As the bike course started to return to the transition area, I tried to reassure myself that I could survive the dreaded run. My main goal for the run was not to pee my pants. Yes, I set very high expectations for myself. My pace on the run was not amazing, and it was hard not to stop to walk. I had to keep reminding myself that I had pushed out a baby and that was WAY harder than running a triathlon! After what seemed like ages, I was finally nearing the finish line. The great thing about the YWCA Womens’ triathlon is that you can select special people to finish with you. I had expected to finish with my husband and baby in the stroller. It turns out strollers were not allowed, so before I even had realized what had happened, hubby passed baby into my arms! The last 100 yards I finished with my baby in my arms, probably the ugliest running gait I have ever had but I didn’t care because my little girl was there with me. As I crossed the finish, they put my medal around her head and I hugged her tight. I didn’t even bother hitting the STOP button on my watch, my finishing time didn’t even matter.

This year the podium finish was not in the cards, but this race was far more memorable. Finishing the race with my baby girl in my arms helped me to feel better about my post-pregnancy fitness and hopefully inspired some future moms-to-be to stay active and keeping ‘tri-ing’ even once baby arrives. I feel so fortunate to have stayed active and strong throughout my pregnancy and post-partum summer and hope that others might be inspired to do the same after seeing me finish the race with my little peanut. Getting into shape after baby is about so much more than a flat stomach, to me it means being strong and confident in your body and passing that along to the little ones you are raising. 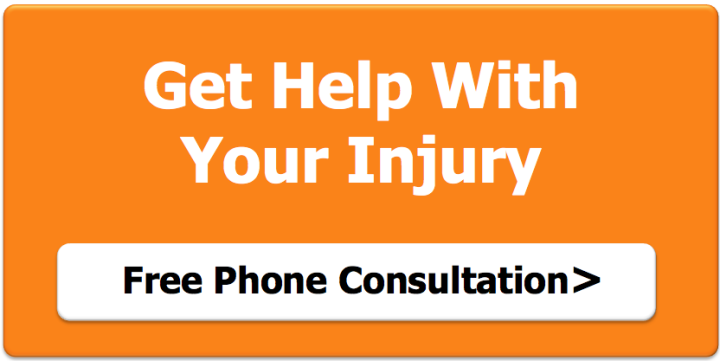